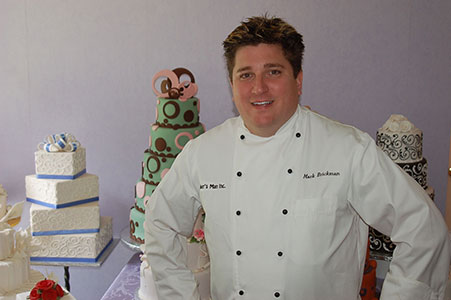 Chef Brickman’s love for baking started at a very young age when he got to help his grandmother bake. Then he was exposed to his first home economics class at the age of 13 and he was hooked.

Mark took all the food classes that were offered and then had the opportunity to attend a local vocational school where he spent half the day taking baking classes. In his senior year, he was selected for a work study program at a very high end Italian bakery in Briarcliff Manor, New York. He worked there every day from 3 AM until 10 AM and then drove 45 minutes to get back to take his first high school class.

Mark was accepted to Johnson and Wales University in Providence, Rhode Island where he studied pastry arts. He received his AOS degree and then continued on to earn his Bachelors in Food Service Management. While attending the university he was on a full scholarship being a PSA, Teaching Assistant and then Fellow. He was asked to help develop a work study internship in Lausanne, Switzerland. He worked at Restaurants La Voile Doir where he created desserts for three restaurants and banquets under the supervision of a French pastry chef.

Chef Brickman’s first position after graduating top of his class from Johnson and Wales was at The Peabody in Memphis, Tennessee. He worked there as assistant pastry chef for two years. He then joined The Ritz-Carlton in St. Louis as Assistant Pastry Chef. In October of 1995, Chef Brickman was selected to work in Atlanta for the 1996 Summer Olympics. He worked as Assistant Pastry Chef at The Ritz-Carlton Buckhead.

After September 11th his position with Hyatt was downsized so that is when he started his dream company, Baker’s Man Inc. He started his vision with the assistance of his wife Becky who ran the front office and assisted in the back. He found a warehouse space near his home and opened his commercial kitchen and wedding showroom. After 15 years, Baker’s Man Inc. has earned many awards and honors of being one of the best cake bakeries in Atlanta.