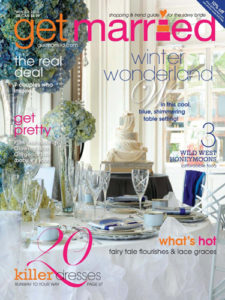 We tasked Event Designer/Wedding Planner Brian Green with bringing our vision of winter romance to life in a gorgeous wedding theme.  Brian’s light bulb moment?  When he got a sneak peek at a new line of Lenox china called Blue Frost.  “The china is absolutely fabulous and was the original inspiration for the tablescape and color scheme,” Brian says.  “I decided on an overall traditional look with a close of modern whimsy.”

Brian created the centerpiece, a collection of amazing vases in silver mercury tones starting at 27-inches tall and scaling down toward the table.  The huge, blue and white hydrangea balls – a total of 120! – are lush, but still very soft and romantic.  As an embellishment, snowflakes were hung from cascading crystals. 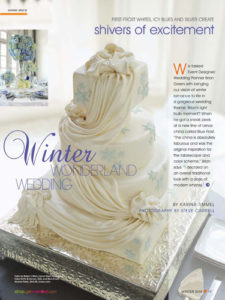 To complement the dinnerware, he chose spectacular textured chargers in glossy gray.  “They really make the china pop,” Brian says.

The reception table was dressed with shite faux-dapioni linen with a crystal-white organza embellishment, and ruffles, roses and subtle feathers for movement and whimsy.  “I chose the linen because it is romantic, but still very modern.  It anchors the table in a really beautiful way,” he adds.

Accents of dark blue were brought in with round menu cards, ribbons and chair swags.  “The darker shade is stronger against the soft gray and blue,” Brian notes.  “A little bit goes a long way.  And the unique menu shape is perfect for the couple who appreciates something different.” 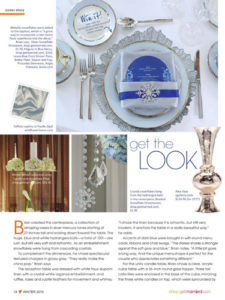 For the unity candle table, Brian chose a clear, acrylic cube table with a 36-inch round glass topper.  Three tall calla lilies were enclosed in the base of the cube, mirroring the three white candles on top, which were surrounded by roses, hydrangea and orchids. 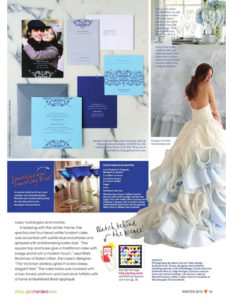 In keeping with the winter theme, the spectacular four-tiered white fondant cake was accented with subtle blue snowflakes and sprayed with a shimmering luster dust.  “The square top and base give a traditional cake with swags and knots a modern touch,” says Mark Brickman of Baker’s Man, the cake’s designer.  “The Victorian plateau gives it a very classy, elegant feel.”  The cake table was covered with a two-toned, platinum and iced silver taffeta with a hand-embellished floral applique.